Moringa seed extract comes from the drum stick tree which is a South Indian tree that is also now cultivated in other areas such as Africa or South America. In India Moringa is traditionally used as staple food and as ‘Medical Plant’ as part of the Ayurvedic nutrition and therapy. All parts of the Moringa tree are traditionally used as foods in India, Moringa fruits are cooked like beans, the leaves are cooked like spinach or used for making tea, and the roots are also used for cooking or making teas. Moringa is very rich in various nutrients including vitamins, minerals, amino acids, lipids, etc. Moringa also contains various bioactive compounds including Isothiocyanates, flavonoids, polyphenols, etc. Moringa is also one of the new and powerful superfoods. 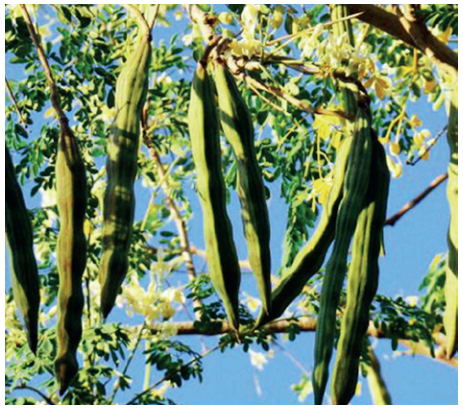 Glycosylates are secondary plant components that widely appear naturally in a lot of plants and vegetables of the brassica family especially in cruciferous vegetables such as broccoli, Brussels sprouts, and cabbages. When intact pants and vegetables are damaged, such as from chewing, this allows all plant compounds to mix and the enzyme myrosinase in the plants transforms glycosylates into isothiocyanates. Isothiocyanates are extremely reactive components and they are responsible for the pungent taste of some cruciferic vegetables such as mustard, radish, horseradish, and wasabi.

Glucomoringin (GMG) is a specific benzyl-Glucosinolate in Moringa. Moringa seeds and leaves are rich in Glucomoringin (GMG), the seeds are lower in dangerous alkaloids compared to the leaves, and do not contain chlorophyll so the extracts are snow white. The active form of GMG is its metabolite benzyl-isothiocyanate (BITC) which shows various bioactivities, but BITC is extremely unstable as substance. Benzyl isothiocyanate (BITC) is a natural isothiocyanate that is found in different plants of the mustard family.

Glucomoringin is a solid, odourless compound, which is stable at room temperature and has almost no taste, which makes it markedly different from other natural bioactive isothiocyanates such as sulforaphane for example which are volatile liquids, with a strong pungent smell and taste.

Glucomoringin can be consumed via Moringa Oleifeira products and it can be easily concentrated by extraction from Moringa raw materials such as leaf or seed. Glucomoringin is very stable even in water and it is converted in the human body directly into benzyl-isothiocyanates such as Glucomoringin-Isothiocyanate (GMG-ITC) by intestinal bacteria.

Moringa Extract is a solid, odourless white powder, which is stable at room temperature and has almost no taste. The moringa seed extract powder is almost clearly water soluble and has a slightly yellow colour (much less greenish, brownish than other Moringa extracts).

We are EU organic certified

Any cookies that may not be particularly necessary for the website to function and is used specifically to collect user personal data via analytics, ads, other embedded contents are termed as non-necessary cookies. It is mandatory to procure user consent prior to running these cookies on your website.