Green tea comes from the tea leaves of the Camellia sinensis plant. The leaves are not fermented or heated like black tea leaves and therefor green tea contains a lot of chlorophyll, antioxidants and polyphenols. When tea plants were discovered, tea was first just used as medicine and only grew later into a beverage. The plant is known from the Chinese medicine a long time ago. It is not sure, if tea was discovered by a Chinese King, Sheng Nong (nearly 3000 B.C.) or if it was originating from India and spread through Buddhism. From there it could have been brought to China, Korea and Japan. But according to the first document about tea, the origin has to be in China or India. Green tea contains a great spectrum of valuable active substances. 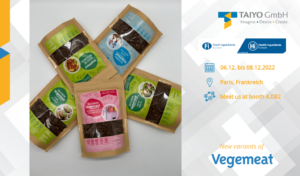 At this years Fi Europe 2022 in Paris, Taiyo is presenting novelties from the Sunfiber®, Vegemeat and Sunphenon® ranges, in addition to the already well-known functional ingredients.

At DrinkTec Munich 2022 functional ingredient expert Taiyo presented brand new beverage concepts which addressed current consumer trends, such as energy water, sleep water, sports nutrition, and other functional drinks. The company presented a newcomer to its Sunfiber® portfolio, Sunfiber VC – an all-natural, 100% soluble dietary fiber – as well as its new Sunfiber Water, CherryShield water and other functional waters. It also presented different “always perfect instant teas”, specially prepared for being brewed in Nespresso cups. Other highlights at the Taiyo booth included the SunMatcha extract and Moringa extract with weight loss properties. The managing director, Dr. Stefan Siebrecht, also informed the audience about the effects of Theanine and it´s benefits for your beverages.

Teavigo® is an innovative product that has many dynamic uses. It is made from high quality green tea leaves from the Camellia sinensis plant. Teavigo® consists of a high polyphenol tea extract that has numerous biochemical and physiological benefits such as antioxidant, anti-microbial, deodorant and thermogenic (fat burning) activities.

Sunphenon® is an innovative product that has many dynamic uses. It is made from high quality green tea leaves from the Camellia sinensis plant. Sunphenon® consists of a series of tea extracts that have numerous biochemical and physiological benefits such as antioxidant, anti-microbial, deodorant and thermogenic (fat burning) activities.